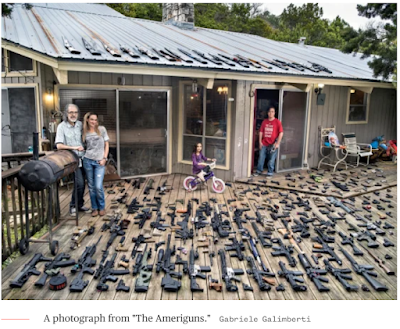 NBCNews
This is where I differentiate from most Americans. I do not see anybody of military grade capacity here, I think the kid with the rifle is more of a problem, that little girl probably is the best hope for the house because her family's stupid is not visible on her yet. They put like a porno picture in the news article about school shootings because LGBTQ math be like that, they do not want anyone who does not correlate school shootings to sexuality to reference them. They claim that taking four pictures of gun collections describes "gun culture" in the United States.

my photos have gone viral around the world, especially in the U.S. They are a sort of cultural Rorschach test, sparking opposing and divisive actions and reactions. Each side digs in further and, unfortunately, this may make a solution to America’s gun violence crisis less likely.

maybe you should end your self-defeating ways, I do not know?

And whatever your feelings about the Second Amendment, American gun violence is a crisis.

I do not care what your feeling are about large cats or black bears, animal violence is violence.

but each year there are thousands and thousands — an average of 40,000 per year — of other gun-related deaths that don’t make headlines.

there has been a million COVID deaths so far and I still do not care. As soon as a war breaks out I think statisticians are taking a hike in my administration. Gun collectors are inherently irresponsible. Most of the guns shown are of a highly depreciating value. The design of a lot of these rifles would substantiate the need to breach body armor, if a war were to break out I think people using anything less than a 7.9 caliber would lose a sustained firefight in very reliable fashion. A typical gun collection does not branch into the need of actual military grade weapons. An AK-47 is insufficient for modern conflict, armed conflict is a technological struggle. An ill conceived approach to war is detrimental to personal health.