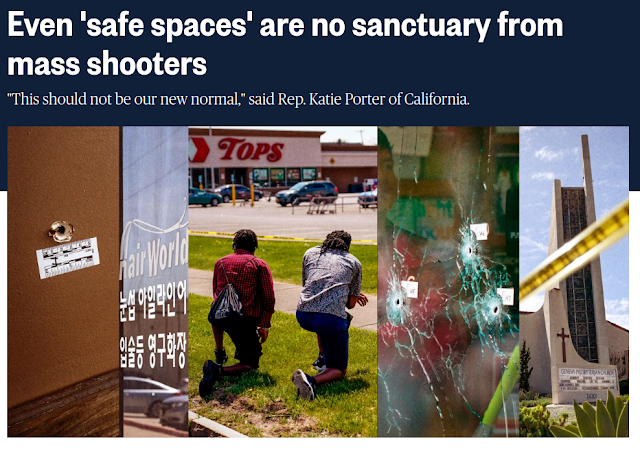 MSNBC is putting their twist on whatever they can catch the elderly off guard with. Katie concedes that she thinks this is normal.

Experts who have studied the phenomenon said the three shootings, which have left 11 people dead and 11 more wounded since Wednesday, underscore a sad fact that most of us already understand on some level — that no place is safe anymore.

“They are targeting people in places like nail salons or churches or grocery stores because they think this is where the victims will be the most vulnerable, this is where they think they will find people who won’t fight back,” Seamus McGraw, the author of “From a Taller Tower: The Rise of the American Mass Shooter,” said of the suspected shooters.

We, as a nation, have become desensitized to the shock and pain in the wake of mass shootings. In the bottomless silence between gunshots, as political stalemate ensures inaction, the killing continues; the dying continues. From a Taller Tower attends to the silence that has left us empty in the aftermath of these atrocities.

oohhh the silence. From Seamus McGraw's bio from his website (not linked) there is a picture of him inhaling some intoxicant (surprise) and is completely silent as it relates to his expertise in anything

The MSNBC article is reminiscent of a ENC1101 liberal echo chamber where the teacher has you quote liberal sources to affirm whatever opinion you can not convince people of. We are suppose to take note of Seamus McGraw's name and expertise as he is mentioned 5 paragraphs later.

“White supremacy is the garb they wrap themselves in to cover their raging sense of victimhood and narcissism,” McGraw said of the Buffalo suspect.

MSNBC as I consider it is an illicit actor functioning a racial agenda off of sensationalism for profit. This is how the description of his book ends

Drawing on the experiences of survivors and first responders as well as the knowledge of mental health experts, McGraw challenges the notion of the “good guy with a gun,” the idolization of guns (including his own), and the reliability of traumatized memory.